In a development that helps Mauritius to maintain its status as a leading financial centre, on Thursday the jurisdiction exited the ‘grey list’ of the Financial Action Task Force (FATF) --- an intergovernmental policy body that sets anti-money laundering standards.

The 5th Plenary of the FATF under the German Presidency of Dr. Marcus Pleyer took place between 19-21 October 2021. At this meeting, the FATF has congratulated Mauritius for the significant progress made in addressing the strategic AML/CFT deficiencies previously identified by the FATF. Mauritius’ action plan was deemed as sufficient and as such Mauritius no longer being subject to the FATF's increased monitoring process. This comes after Mauritius received an on-site visit, despite the COVID-19 crisis.

Mauritius was originally included on the FATF grey list in February 2020 as a result of strategic shortcomings identified by the FATF in its AML/CFT regime. Since then, the Mauritian Government had made a high-level political commitment to actively work with the FATF to address the identified deficiencies. Following which the national AML Committee, Government officials, Regulators and other stakeholders have supported the implementation of key reforms in relation to the FATF action plan.

Apex Group was pleased to play a central role in supporting Mauritius’ removal of the list. Our Mauritius Managing Director, and Chairperson of Mauritius Finance, Mahesh Doorgakant, notes that our financial sector has indeed learned valuable lessons since last year’s grey-listing.

Following FATF’s decision in 2020, numerous initiatives have been deployed to strengthen the AML/CFT rules and best practices for the Mauritius International Financial Centre. “Mauritius has already implemented 39 out of the 40 FATF recommendations regarding AML/CFT, as highlighted by the latest ESAAMLG report. In doing so, we are already ahead of countries like Singapore, the United Kingdom, the United States and even some member states of the European Union and the FATF”, he adds.

This was also worked upon by Apex’s regional compliance officer, Sameerah Joomun, who was part of the Mauritius delegation which met with the FATF from the private sector.

Government, the regulator and the financial sector operators are now maintaining their efforts so that Mauritius becomes the first country to comply with all 40 AML/CFT rules of the FATF in the very near future. When this happens, Mauritius will be a model jurisdiction in AML/CFT compliance worldwide. “Now that we have exited the FATF grey list, the next step is to ensure that the EU removes Mauritius from its ‘black list’ as well. We are initiating the necessary procedures and we will explore all options to expedite this process”, Mahesh Doorgakant, says.

For more information about how Apex can support business in Mauritius, please Get in touch 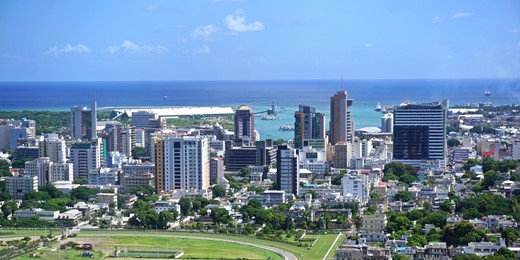